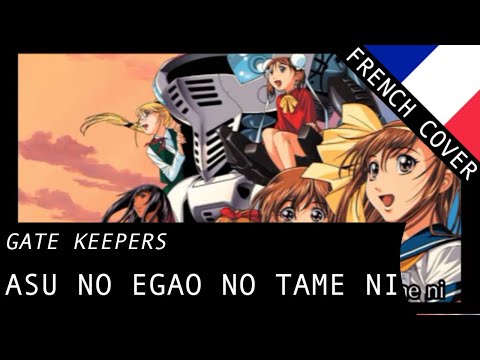 Gate Keepers is a Japanese manga series written by Hiroshi Yamaguchi and drawn by Keiji Gotoh in 1999. The manga was adapted into anime series produced by Gonzo, and first aired on April 3, 2000. The series was also produced into a role-playing game for PlayStation. A six episode OVA sequel Gate Keepers 21, was released in 2002. The main characters in the OVA sequel were the next generation of Gate Keepers.

All incarnations of the titled 'Gate Keepers' series, follow the same basic premise and share most of their characters, with some major discrepancies (mainly involving the character Reiji Kageyama). A character from the game, Francine Allumage is completely absent from the anime. Another character from the game Misao Sakamori, was replaced in the anime with the new original character Megumi Kurogane (though Misao does make a guest appearance towards the end of the anime). The story is set in 1969, a period of time in which Japan is experiencing intense economic and social development after the end of World War II in 1945. Unbeknownst to humans, alien/interdimensional beings have emerged with plans to take over the world by sending numerous agents to wreak havoc in cities, turning people into robotic minions. They are referred to as 'Invaders'. In an attempt to confront the Invaders and defend the planet; an elite but highly secret organization of peace-keepers called the Alien Exterminating Global Intercept System (more commonly known as A.E.G.I.S.), was set up with special funding from the government.

They rely on the ability of 'Gate Keepers', who have the power to open dimensional 'gates' of a paranormal energy that give them their superpowers. These superpowers are the only weapons that have any effect on Invaders. Although A.E.G.I.S. Has branches around the world, the series focuses on the Far East division in Japan. The headquarters of the Far East branch of A.E.G.I.S. Lies beneath Tategami High School, a facade created by the organization to mask the active recruitment of new Gate Keepers. Since many of the candidates were High School students, the location allowed the agents to be enrolled in school and be available for a mission at a moment's notice.

CHARACTERS: - Shun Ukiya: The series focuses on Shun Ukiya, a young Japanese schoolboy (who permanently wears a bandage over his nose, the only exception being his appearance in the final chapter of Gatekeepers 21) with a deep passion for kendo. Ukiya discovers that he has the ability to open the Gate of Gales in a chance encounter with an Invader attack near his hometown, where he meets fellow Gate Keeper and childhood friend, Ruriko Ikusawa. He is subsequently invited to join A.E.G.I.S.

And controls the Gate of Life. Ruriko is the unhappy bearer of the nickname 'Rurippe' (pronounced 'RU-RI-PE'), which holds no real meaning except that Ukiya relates it to her childhood appearance as a sniveler (or one who always has a runny nose).